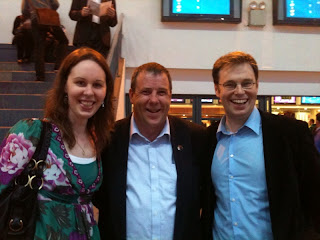 With Kathleen and Kevin at Shelbourne Park
.
One of the signs of hope of recent years has been the increase in popularity of groups like Youth 2000. In August they will host their annual youth festival at Clonmacnois - beside the ruins of an ancient Irish monastery on the banks of the river Shannon.
They held a fundraiser at Shelbourne Park Greyhound Track in Dublin recently. As they say, "a great night was had by all"! 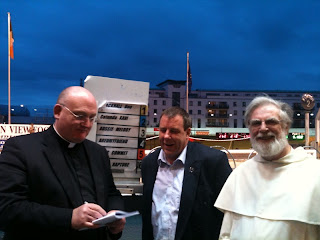 Posted by Brother Rupert O'Sullivan at 5:13 PM No comments: 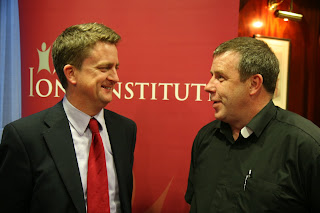 With Mr David Quinn, Director of the Iona Institute, after the talk.

As a vocations director, it's important for me to keep up to speed on any new research which helps me to understand the culture and society better. Recently, The Iona Institute for Religion and Society organised a public talk called "Why religion will make a comeback" here in Dublin. The speaker was Dr Eric Kaufmann, lecturer in politics and sociology at Birkbeck College, University of London.

Popular wisdom proposes that the West will become more secular and liberal in the years ahead and that religion will be driven to extinction. However, his findings show that religion is far more robust than many secular thinkers ever predicted. The fact that religious believers have higher birth rates indicate that they will have a strong influence on the composition of Western populations in the decades ahead.

Dr Kaufmann is the author of the book, "Shall the Religious Inherit the Earth?"

I bought a copy on the night. That was the easy part. Trying to find the time to read it is proving more difficult!

Posted by Brother Rupert O'Sullivan at 10:26 AM No comments: 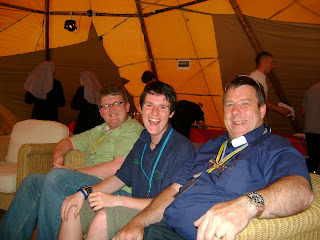 With some friends in the "Chill Out Tent"
I'm in England at the moment after spending a super weekend at the first ever national vocation discernment festival at Oscott College in Birmingham, Invocation 2010. As many as 400 people attended.

It was a very busy weekend with talks, workshops, presentations and, above all, prayer. I participated in the Questions and Answers workshop. 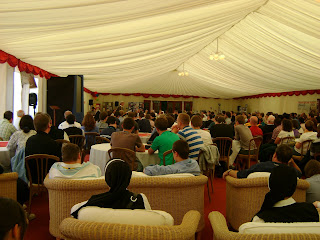 The large gathering in the main tent for a keynote presentation.

I wish more people had a chance to see so many young people discerning a religious vocation. It was very encouraging.

If you have ever thought of a religious vocation feel free to give me a shout at prescall@eircom.net 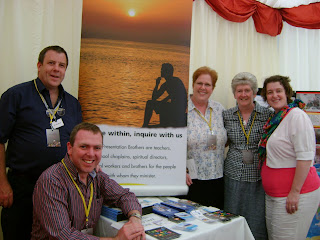 With the Sisters of St Paul at our display.
Posted by Brother Rupert O'Sullivan at 9:01 PM No comments: 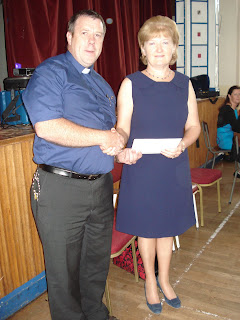 Even though I'm the vocations director for the Presentation Brothers I also have other jobs. One of these is to act as the Chairman of the Board of Management of Greenmount National School in Cork city.

This week I travelled to Cork to join in honouring Mrs Anna Herick, Deputy Principal, who is retiring.

The Presentation Brothers have traditionally been associated with education and that tradition continues today due to the commitment and professionalism of people like Anna.

Happy retirement Anna!
Posted by Brother Rupert O'Sullivan at 12:35 AM No comments: