On the road to Lough Derg... 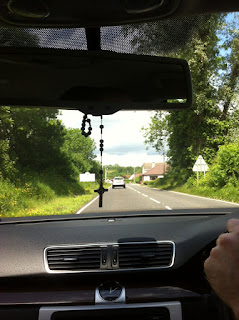 I'm on the road this morning for the Presentation Brothers pilgrimage to Lough Derg in County Donegal.

I'm making the pilgrimage with a group of mostly young adults for the next three days.

It's a penitential experience and it's been many, many years since I was here last. I have a certain degree of dread I must admit. We won't be going to bed at all tonight as we keep a vigil of prayer.

Naturally, I'll be remembering those of you who are discerning your vocation in those prayers!
Posted by Brother Rupert O'Sullivan at 12:21 AM No comments:

A call to holiness 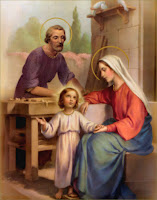 A picture of the Holy Family hangs in the hallway in the Brothers' house in Cork. I sometimes look at it and wonder if I could ever be that holy, especially when I consider my own sin and failures!

And yet the Christian life is about achieving holiness and, wait for it - sainthood! We are called to be saints!

That may seem like an impossible task. But it is helpful to remind ourselves that a life of holiness is not a life without difficulties and challenges. There will be moments of conflict and tension. And very often we will find that it is in our relationships with other people that we have the greatest opportunity to be either saints or sinners. Holiness would be so much easier if it wasn't for other people!

One of the ways to grow in holiness is to practice forgiveness. Try it....

Holiness is also associated with joy. Indeed, the great Dubliner, Blessed Dom Columba Marmion said that "joy is the echo of God's life within us". Joy is always a good sign of spiritual health!

Posted by Brother Rupert O'Sullivan at 6:17 PM No comments:

Studying as a Brother... 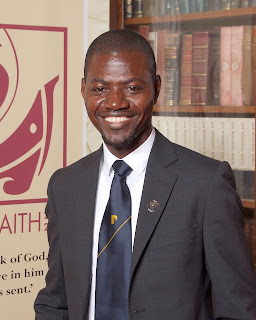 I made an early morning trip to Dublin Airport this week to accompany Brother Joseph as he returned to his native Ghana.
He was with us in Ireland for almost five years studying for a degree in theology and psychology at All Hallows College and a further course in formation at Loreto House in Dublin.

Brother Joseph made his Final Profession in Ghana last summer. His new ministry will be to act as Director of Novices for the Presentation Brothers in West Africa.

As I was returning from the airport to the Brothers' house in Dublin I thought of how study and personal formation is a part of our lives as Brothers.
Sometimes men who enquire about a religious vocation are intimidated when they hear about the study and intellectual formation.

For instance, I'm doing a two-year course in spiritual direction at the moment. Yes, it takes a lot of my time, especially at weekends, but I know I'll benefit from it and, hopefully, the people to whom I minister will benefit too. Similarly, Brother Joseph's course in formation in Dublin will stand to him as he works with our novices in Ghana.

A degree in theology is a basic requirement for a religious brother - it's an essential part of the formation process.

If you'd like to learn more about the procedure for becoming a Brothers, get in touch at vocation@PresentationBrothers.org

Posted by Brother Rupert O'Sullivan at 5:46 PM No comments:

Ruah kicks off in Galway

This past weekend my travels took me from Cork to Dublin Airport to meet with two Presentation Brothers from West Africa - Alban Besigrinne and Wilfred Angko.

I accompanied them to Galway for the start of the RUAH programme which is taking place on the university campus there from June 14th to 27th. Ruah is a Hebrew word which means “Spirit”.

Alban and Wilfred are participants in the programme along with 50 religious sisters, brothers and lay people from across the worldwide Edmund Rice and Nano Nagle networks.

The Ruah Team has drawn up an exciting programme of events. The first week is facilitated by Margaret Silf, a well-known writer and retreat director who will help the participants awaken to the "Encounter with Mystery" in their lives.

During the second week participants will engage with the stories of Venerable Nano and Blessed Edmund in those places hallowed by their memory: Callan, Waterford, Ballygriffin and Cork.

Edmund Rice is the founder of the Presentation Brothers and Christian Brothers and Nano Nagle is the founder of the Presentation Sisters. By reflecting on their stories, participants will hopefully discover new insights and come to an awareness of how the Holy Spirit may touch their lives too. I look forward to meeting up with them again on the last day of their pilgrimage which concludes here at Mount St Joseph in Cork.

If you wish to know more about our vocation as followers of Blessed Edmund Rice , don’t hesitate to shoot me an email: vocation@PresentationBrothers.org
Posted by Brother Rupert O'Sullivan at 11:53 AM No comments: 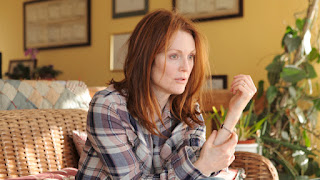 I went to the cinema recently with a friend (yes, Brothers do go to the cinema occasionally) to see Still Alice. After viewing this well-produced film, I was left in no doubt about how challenging life is for people with Alzheimer’s or a related dementia.

Julianne Moore who played the part of a housewife suffering with the illness captured how the disease creeps up and eventually controls life. Still Alice also did a good job of portraying the effect the illness can have on a family.

It was very engaging. It left me with a feeling of helplessness and at times it brought tears to my eyes. That’s the power of good cinema. It connects us at a deep level with the humanity of the character on the screen. Strangely, we often seem to be able to connect faster and more deeply with these fictional characters and strangers on the big screen than real people in real life.

We know that the challenge of the Christian life is to see each person as our brother and sister, to see their pains as our pains. But that's not an easy task – we all have busy lives full of distractions.

Perhaps we empathise more readily in the cinema because we manage to block out the noise of the world. In that dark cinema theatre, it’s just you and the screen. We can focus. We can listen. We can become involved in another person’s story.

The trick then is to find moments of silence in our own lives where we can pause and reflect on what the people around us are saying.

Religious life, when lived well, affords us the time and space for reflection during which we can identify, at a deep and meaningful level, with the needs of other people.

It gives us a chance to ask: "Who, of all the people I met today, is in need of a word of encouragement or support?" It’s a challenge to break from the orbit of our own ego and self-interest and notice others…but that's the challenge...

And, believe me, when you stop to look, you’ll see many around us who could do with a little help or support…And, to be honest, that's one of the reasons I'm a religious brother.

If you would like to learn more about life as a Presentation Brother, get in touch on vocation@PresentationBrothers.org

Posted by Brother Rupert O'Sullivan at 5:41 PM No comments:

Christ on the streets of Cork 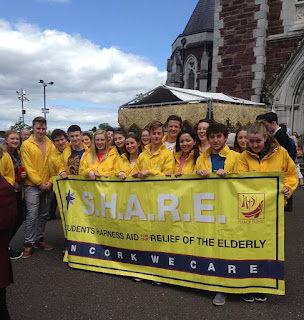 Some of the teenagers who took part in this year's Procession in Cork.

I took part in the Eucharistic Procession, now in its 90th year, here in Cork city on Sunday. It takes place annually on the Feast of Corpus Christi - The Body of Christ.

There was a great group of young people from S.H.A.R.E. with us in the procession. We assembled in the grounds of the Cathedral of St Mary and St Anne and processed to Daunt Square in the heart of the city.

Bishop John Buckley followed the procession with the Blessed Sacrament. We were accompanied along the way with prayers, reflections and hymns.

Archbishop Kieran O'Reilly of Cashel and Emily, who is a past pupil of the Presentation Brothers, was the guest preacher this year.

A Eucharistic Procession is a public witness to the faith. It celebrates the presence of Jesus Christ in the Eucharist. Our faith does not belong in the safety of the church. We are expected to take our faith into the world. The Procession reminds us of that challenge.

If you would like to follow Christ as a Presentation Brother, get in touch with me at vocation@PresentationBrothers.org
Posted by Brother Rupert O'Sullivan at 12:38 PM No comments: