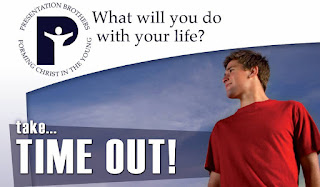 It's a busy evening here at our community in Glasthule in Dublin as we prepare for our Time Out vocations weekend tomorrow.
.
I ask you to please pray for the men who are coming and for the Brothers who will be participating in different ways.
Posted by Brother Rupert O'Sullivan at 5:36 PM 2 comments:

Praying the Angelus for Vocations 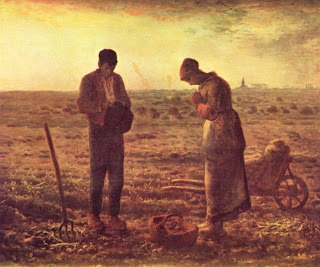 "The Angelus", Jean-François Millet, 1857-1859
Musée d’Orsay, Paris.
Today is the Feast of the Annunciation, an event which we remember every day when we pray the Angelus.

I want to encourage people to offer their Angelus prayers for vocations.

Here is a prayer resource prepared to help those who want to meditate on this beautiful prayer.

Let us pray that more and more people will answer the Lord's call with the courage of Mary's 'yes'.
Posted by Brother Rupert O'Sullivan at 2:00 PM 1 comment:

Friends, this is a great little prayer for those who are discerning...

Dearest Jesus, teach me to be generous;
teach me to love and serve you as you deserve;
to give and not to count the cost;
to fight and not to heed the wounds;
to toil and not to seek for rest;
to labour and to look for no reward,
save that of knowing that I do your holy will.
- St Ignatius.
Posted by Brother Rupert O'Sullivan at 2:41 PM 1 comment:

Happy St Patrick's Day everyone!! St. Patrick, the patron saint of Ireland, is one of Christianity’s better known saints. He was born in Britain towards the end of the fourth century. Tradition says he was captured and taken to Ireland where he worked as a slave. Lonely and afraid, he turned to his faith for solace, becoming a devout Christian.

He eventually escaped to Britain and studied for the priesthood and later became a bishop. He returned to Ireland, preached the Gospel and converted many.

For people discerning a call to religious life there are similarities with St. Patrick.

• Prayer was important to him.
• He faced challenges in his life and moments of decision.
• Ultimately he chose to devote his life to others and to the service of the Gospel mission.

St. Patrick’s Day also reminds us of the strong missionary tradition of the Irish Church and the missionary dimension of the Christian vocation. We remember our Irish missionaries throughout the world and also the Irish people who have had to leave home to work.

"And our hearts shall yet burn wheresoever we roam, for God and St Patrick and our native home."
Posted by Brother Rupert O'Sullivan at 12:55 PM No comments: 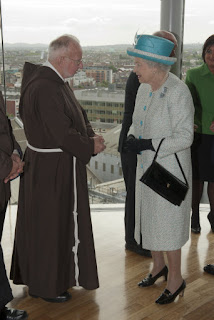 Brother Kevin meets Queen Elizabeth II at the Guinness Storehouse last year
Brother Kevin Crowley, of the Capuchin Francicans, has been named the winner of the "Local Heroes Award 2o12"!
.
Brother Kevin is a well-known and highly regarded religious brother who had devoted his life to the service of the poor in inner city Dublin. He is the director of the Capuchin Day Care Centre for the homeless in Bowe St. The Presentation Brothers have traditionally had strong bonds with the Capuchin Franciscans over the years.
.
Here's an article about Br Kevin's work written in The Messenger in 2010.
.
Brother Kevin is a great example of the positive role that religious brothers can play in both the Church and our society. Well done Brother!
Posted by Brother Rupert O'Sullivan at 11:05 AM 1 comment:

The work of a vocation director... 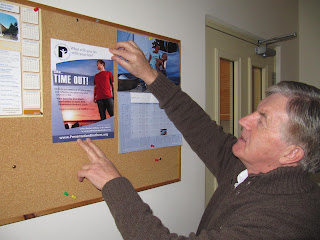 I'm spending a lot of time these days promoting our 'Time Out' vocations weekend on Saturday 31st March/Sunday 1st April. This effectively means calling into churches and pinning our poster to noticeboards, or indeed, anywhere that I see a noticeboard!

It also involves inviting men who have been in touch with me over the last few months to consider coming to Dublin for the event.

If you've been thinking about religious life why not come along? Just drop me a line at vocation@PresentationBrothers.org and I'll be happy to answer any questions you have about it all.

Posted by Brother Rupert O'Sullivan at 10:29 AM No comments:

Take some Time Out!! 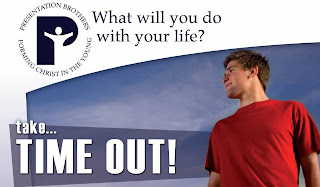 I'm happy to be able to announce the details of our next Time Out Vocations Weekend.
.
It takes place at Presentation Brothers, Glasthule in Dublin and starts at 11am Saturday 31st March 2012 and concludes at 2pm the following day, Sunday 1st April 2012.
.
There's more information over on the Congregation website.
.
Feel free to send me an email at vocation@PresentationBrothers.org if you'd like some extra information. Costs (accommodation and meals) are free.
.
If you've been following this blog for a while now, why not make this an opportunity to go a step further in your discernment...?
Posted by Brother Rupert O'Sullivan at 12:36 PM No comments:

After almost four years of preparations it's hard to believe that there are now only 100 days to go before the 50th International Eucharistic Congress opens in Dublin.

The Presentation Brothers will have a stand in the exhibition hall. Brothers and members of the Presentation Family have already signed up to be volunteers for the weeklong event.

I strongly encourage anyone who is interested in attending to start planning now. This will be a wonderful event in the life of the Church. For those who are discerning a religious vocation, I imagine the event will be very encouraging.