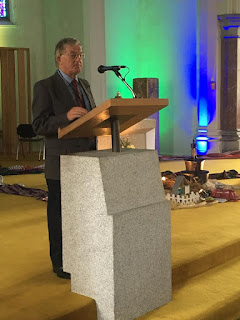 Director of Vocations Ireland, Margaret Cartwright and myself represented Vocations Ireland together with members of different Religious Congregations at Music Ministry Together summer school in Cistercian College, Roscrea, Co Offaly.

Vocations Ireland is an association of Vocation Directors of Catholic Religious Congregations in Ireland. We work to present religious life, apostolic, missionary and contemplative, as a life choice which is one way of following Christ and bringing deeper meaning and purpose to life. For further information, email; info@vocationsireland.com. I lead morning prayer one of the days and gave an input on Vocations on the varied ministries of different congregations.

Music Ministry Together (MMT) is a summer school for young people and adult leaders with a love for liturgical music and imbued with a desire to serve as ministers in their parishes, schools and communities. The theme of this year’s summer school was, “Make Your Home in Me.” (John 15:4). During the five-day summer school the participants took part in various sessions teaching and learning church music together, as well as participating in various forms of liturgy. There were opportunities for sharing the Eucharist, morning and evening prayer and taking part in Catechesis, along with organised activities and entertainment.

The MMT summer school 2017 takes place during the first week of August in Cistercian College, Roscrea. It’s a great way of spending a few days of your holidays; I highly recommend it. Email; ian@musicministry.ie. or see their website for more information.


Posted by Brother Rupert O'Sullivan at 12:33 PM No comments:

The Faith of our Olympians 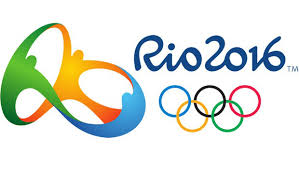 Despite having her Olympic hopes dashed, Irish boxer Katie Taylor proved this week that her faith in God is unshakable. One of Ireland’s most prominent hopefuls – she was a surprise casualty after her defeat to Finland’s Mira Potkonen.

But, even obvious heartbreak in Rio di Janeiro couldn’t dampen Katie’s devout Christian faith. "Sometimes the plans you have in your heart aren’t God’s plans” an emotional Katie said in the aftermath of the bout, trying to come to terms of her shock defeat.

“God is so great, it’s still a privilege and an honour to be here,” she said, going on to say: I just have to thank everyone for their support and prayers – I’m so humbled by that.”

Reflecting on the outcome she was in a philosophical mood. It’s been a very tough year. I’ve suffered a lot of losses this year, and it’s very, very hard to take – the Olympics is a dream for me.
“I came in here prepared very well. I gave it my best shot; it just didn’t happen,” she said. Katie is one of a growing number of Olympians who have been vocal about their strong religious faith during the Rio Olympics.

Jamaica’s Usain Bolt, a practising Catholic who wears his faith on his sleeve, became the first athlete to win three Olympic 100m titles by picking up gold at the games. Usain embraced the Miraculous Medal he wears around his neck as he powered to victory.

U.S. athlete Simone Biles, who keeps her Rosary beads in her bag at all competitions has won the women’s all-round Olympic gold medal for Gymnastics.The 19-year-old gymnast revealed that she carried a white rosary in her gym bag. “My mum, Nellie, got me a rosary at church...I don’t use it to pray before a competition. I’ll pray normally to myself, but it’s there just in case.”
(Irish Catholic - Thursday, August 18)
Posted by Brother Rupert O'Sullivan at 12:12 PM No comments:

Life after the Leaving! 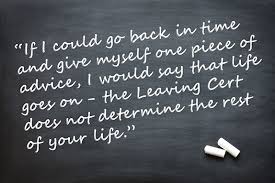 The Leaving Cert results were issued during the week. The newspapers were full of the tremendous achievements of those who received a string of A1s. Congratulations on such wonderful achievements! But let’s keep a perspective on things and not forget those who just did OK and are in the majority.

The results came out during the Olympic Games in Rio and I think the games in a way reflect the consolation and desolation felt by some students – the Usain Bolts, Michael Phelps, Annalise Murphys, the O’Donovan brothers and others but what about the many who crashed out in the first round or limped home mid-field?

The focus this week should really be on the students who felt the sting of disappointment when they received their results – and I imagine they were many.

I want to say to you, things will be better and brighter; that life is more than the Leaving Cert. Flashes of brilliance will come but not in the places you expect them. Life is far more various than we can ever imagine.

Jesus said that there are two roads we can follow. The first is wide and easy to travel. It is downhill most of the way. It is the way of comfort and ease, pleasure and self-seeking. Many are fooled and travel down this road. But in the long run it leads them nowhere. They die in the desert. The second road is narrow and difficult. It s uphill a lot of the way. It is the way of struggle and sacrifice. Few take this road, but they are the lucky ones. This road leads to the Promised Land.


I hope and pray that you will all find joy, hope and fulfilment in whatever road God shows you in your life.
Posted by Brother Rupert O'Sullivan at 5:30 PM No comments:

There is a lot of pressure these days to upgrade. Phone companies offer special incentives if we upgrade to the latest smart phone, while car-dealers are constantly trying to convince us to trade in our older car for a brand new model!

And it wasn’t long ago that all the talk was about buying a starter home or getting on the property ladder. The idea is that we can always go bigger and do better for ourselves. If we think about it, most of us will admit we have more than we need to get by but there is still a drive to acquire more “stuff”.

The rich young man in Lk18:18-23 was busying himself with upgrading. Faced with a lack of sufficient space to store all his crops and goods, he decided to build bigger barns. Satisfied, he then sat back to enjoy the finer things of life, to “eat, drink and have a good time”.

But Jesus offers a gentle reminder that, really, these are not the things that matter. After all, we can’t take any of these treasures with us. Our farmer friend had forgotten to focus on the more important things in life – he had stored up riches on earth instead of focusing on making himself “rich in the sight of God!.

What treasures are important to me in my life?

Posted by Brother Rupert O'Sullivan at 11:39 AM No comments: