Is there more to life than this?

Some members of our Alpha Group 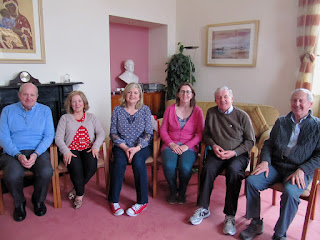 The Presentation Brothers, Mt. St. Joseph completed another successful Alpha course on Sunday with a themed retreat day on the Holy Spirit. Carolyn and Nora joined us for the retreat. The Brothers organise the Alpha course here in our community in Mt. St. Joseph twice a year and in our community in Glasthule, Co Dublin. Our Youth Ministry Team (PBYM) visit schools in the city to deliver the Junior Alpha Programme to TYO students.

While Alpha is open to everyone, we encourage young adults in particular to attend. Our Alpha group here in Mt. St. Joseph met on a Tuesday evening throughout Lent. We were blessed with a wonderful mix of ages and background. Alpha groups are all the more enriched when they are intergenerational and indeed international. The Alpha programme embraces all, atheists, agnostics and believers alike. Participants are encouraged to ask the big questions about life in a safe and informal setting. Usually, a lovely bond develops among the participants with a genuine sense of belonging. This truly is Church in action.

Set over an hour and a half, a typical Alpha session consists firstly of time together over an informal meal. This allows for the all-important bonding to take place. Following this, there is a themed input, either in the form of a DVD or a talk in person. Finally, people go into groups to discuss the topic at hand. The Alpha course encourages people to ask questions pertinent to them and to see if there is room for Christ in their lives. Alpha encourages people to strengthen their faith through grappling with their doubts.

By the end of the 10 weeks, people feel refreshed by Alpha. Everyone feels a genuine sense of belonging to this small community with whom they have journeyed in a short few weeks. But what is perhaps most exciting is seeing people who have connected with God in a very personal way. Lives are changed through the power of the Holy Spirit and it is a privilege to accompany them on that journey.
Posted by Brother Rupert O'Sullivan at 2:32 PM No comments: 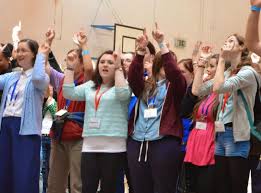 
Next week end is the turn of the Leinster Region who host their gathering in Ashbourne Community School, Co Meath. The annual Summer Retreatl will take place in Mt. St. Joseph, Cistercian College Roscrea from 7–10 July with over 1,000 young people expected to attend.  It also organises a Christmas retreat in Newbridge College, Co Kildare and an annual Valentine’s Ball in February. Plans are well under way for World Youth Day in Poland this July where over 80 members will travel for the occasion. Youth 2000 continues to grow in strength throughout Ireland. In the words of Lana Wilson, the national director, it is about, ‘youth, leading youth to the heart of the Church’ and it appears YK2000 is the only show in town, guys.
Posted by Brother Rupert O'Sullivan at 10:26 AM No comments: 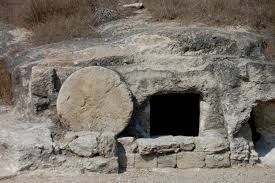 I find the readings at Mass during this Easter season joyful and life-giving. Aside from the beautiful Gospel readings on Sundays there are other very interesting passages. They are very relevant to those of us who live in the Western World where the Church faces many pressures.

The Acts of the Apostles reminds us that times were difficult also for the first Christians. The early Church faced challenges from within and without. Challenges from within were of hypocrisy (Acts 5: 1–3); murmuring (Acts 6 – 1) and doctrinal questions (Acts 15: 1). The major external challenge was one of persecution (Acts: 4: 1-3; 5: 17–18). The challenges that face us as we follow Christ are both internal and external. Persecution of Christian minorities is all too common today. My thoughts go to the families and friends of 72 Christians killed in Lahore recently as they celebrated Easter. The threat to Christians and Christian places of worship is now a worldwide phenomenon.

In reflecting on the readings of these weeks I also think of the question, “Who will roll away the stone?” posed by the women on their way to the tomb. I find an answer from St. Paul when he reflects on the struggle that is part of human life in Romans 7, telling us, “It is the Lord!”

The stone is rolled away and we are opened up to new possibilities, new life and seeing things radically differently. This is accomplished by God. Our task is to allow it to be done.

The strange thing is that on entering the tomb the women learn that Jesus is risen, but at this stage they don’t see or experience the risen Lord. They must wait awhile. For each of us Jesus may be risen but we may have to wait awhile before we come to experience this as a lived reality.

Patience is an important virtue for men and women who are discerning religious life. Maybe, when discerning our future, we too must be patient until we see and experience where the risen Lord may be leading us.

Posted by Brother Rupert O'Sullivan at 10:15 AM No comments:

We are the Easter People! 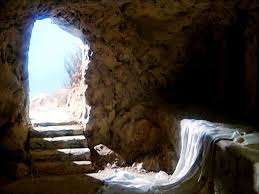 I attended the obsequies of a dearly loved aunt of mine in West Midlands, England at the week end. She left her home and family in the Beara Peninsula in her early twenties to find work in England. She reared a loving, devoted and supportive family and spent her long life as a nurse caring for others. She always thought of others before herself. She bore many crosses in life but she embraced them with great courage and dignity. As I reflected on her death, I recall a story I read in the Irish Catholic recently of a conversation between two unborn twins in their mother’s womb.

“Tell me, do you believe in life after birth?” asks one of the twins. “Yes, definitely! In here we are growing and gaining strength for what will face us on the outside,” answers the other.
“That is utter nonsense!” says the first one. There cannot be life after birth; how is that supposed to look, may I ask?” I don’t exactly know myself but it will certainly be much lighter out there than in here. And perhaps we will actually be running around on our legs and eating with our mouths.” “I have never heard such nonsense! Eating with your mouth, what a crazy idea! That’s what we have umbilical cords for, to feed us. And you want to run around? It would never work; the umbilical cord is much too short!” “It will work for sure. It will all be a little different.”
“You are crazy! Nobody has ever come back from life after birth! Life ends with our birth and that’s it! Period.” “I must admit that nobody knows what life will look like after our birth. But I know that we will get to see our mother and that she will take care of us.”

Jesus told the story in another way using a parable which we often recall when we begin to wonder about death and life after death; “Truly I say to you, unless the grain of wheat falls to the earth and dies, it remains alone. But if it dies, it produces much fruit.” Jesus is talking about himself, when he is buried in the ground like the seed and dies, then he can break forth into new life, be raised from the dead and share that life with all of us.
That’s the first and most joyful message of Easter – that Jesus has, indeed, broken through the barrier  of death to new life and where he has gone, we will follow; each of us, when we die, will be like the seed that breaks forth into new life.    (Article edited; by Fr. Martin Delaney; The Irish Catholic, March 24, 2016)
Posted by Brother Rupert O'Sullivan at 11:23 PM No comments: