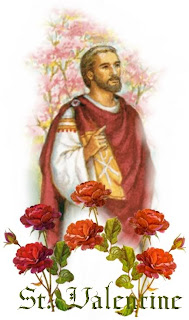 But who was St Valentine? There are some conflicting accounts but we know he existed and his remains have been identified in the catacombs of Rome. This feastday has been celebrated for 15 centuries!

Three things you need to know:
1. He was a Catholic priest.
2. He was arrested for tending to the needs of the persecuted Christians of Rome.
3. He was executed for refusing to renounce the Catholic faith during the persecution of Roman Emperor Claudius.

For anyone who is discerning a vocation, then there is an obvious resonance here.

For a start St Valentine answered the call to serve by embracing a religious vocation. Secondly, he served those in need and risked his own life to do so. Finally, he refused to deny his faith and has since been remembered as an icon of love.

It's ironic that at a time when celibacy and chaste love are dismissed, the day on which the world celebrates love is in fact a day in honour of a priest who died for his faith!
Posted by Brother Rupert O'Sullivan at 9:39 AM