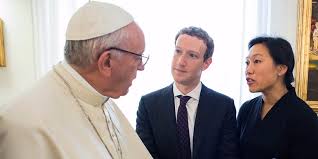 The founder of social media giant Facebook has asserted the importance of faith in a Christmas message to followers.

The previously avowed atheist took to social media over the festive period to wish one and all a “Merry Christmas and Happy Hannukah”, prompting one viewer to pose the question: “Aren’t you an atheist?”

Zuckerberg was quick to reply: “No. I was raised Jewish and then I went through a period where I questioned things, but now I believe religion is very important.”

Zuckerberg’s words on faith came just months after he and his wife Priscilla attended a private audience with Pope Francis at the Vatican, a meeting which had a profound effect on the industry leader.

“We told him how much we admire his message of mercy and tenderness, and how he’s found new ways to communicate with people of every faith around the world.” Zuckerberg wrote later, “It was a meeting we’ll never forget. You can feel his warmth and kindness, and how deeply he cares about helping people.” From humble beginnings as a computer programmer, Zuckerberg became a universally recognised individual when, along with fellow college students in 2004, he came up with the idea of an online networking site, Facebook. The site is used today by one billion people. Zuckerberg is currently ranked by Forbes magazine as the 10th most powerful individual in the world.

Together with his wife, the Facebook founder is responsible for the Chan Zuckerberg Foundation, an initiative tasked with donating some 45 billion dollars of his internet earnings to charitable causes focused on education and curing diseases.
(Irish Catholic, January 5, 2017)