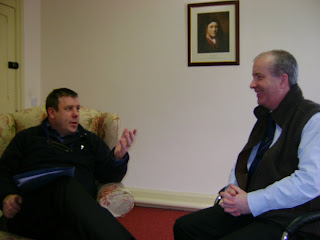 With Br Martin, our Congregation Leader, at Mount St Joseph in Cork

He is elected by the Brothers at a General Chapter which takes place every six years. Our next Chapter is in the summer of 2011. A Chapter is a gathering of the Brothers and lay colleagues from all over the world. It's serious business. The plans for the coming six years are prayed about and decided on during the Chapter.

Our current Congregation Leader, Br Martin Kenneally, is a former vocations director and he has a great understanding of the challenges which we face. He also has great enthusiasm for promoting religious brotherhood. It's great to have someone to bounce ideas off. We're lucky to have him!
Posted by Brother Rupert O'Sullivan at 1:31 PM